Offer insights and options to musicians of all ability levels

To advance the art of horn manufacture and design

Ease the discomfort and anxiety of playing the horn

To explore theories and experiment with an open mind

Born into a musical family, Bruce started playing the cornet at age five. He switched to horn at age twelve at his father’s insistence that the horn was “a nobler instrument.”

Bruce attended Cal State Northridge where he studied with Fred Fox. After five years and with no degree in sight, he decided to attend Cal Arts where he studied with Ralph Pyle. There he met flutist Jody Meese, who eventually became his wife. At the end of his first year at Cal Arts he got his first orchestral job playing in Mexico City. Fortunately, so did Jody, and off they went to Mexico where Jody played in the National Opera and Ballet Orchestra and Bruce played in the Mexico City Philharmonic. 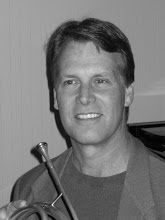 "Bruce is the SF Symphony horn section's go-to guy for horn repair. I can't tell you the number of times someone has had a last minute problem and Bruce made it possible for the show to go on. He has also overhauled an old C.F. Schmidt of mine and put a new pipe of his design on it, making it possible for the horn to be played again after 25 years. Bruce is working on creative new designs for horns, trying to think outside the box and create horns that are different from some of the traditional models we have become used to. He has also made a very nice instrument in the classic Geyer mold for a former student. Whether you are interested in repair or a new instrument, give him a call."

Bruce Roberts is a horn designer and builder in California's Bay Area.

In 1981, after three years in Mexico, Bruce and Jody moved to Salt Lake City where Bruce played in the Utah Symphony. They stayed there for seven years and had their first child, Laurel, in 1986.

At the 1987 Horn Symposium hosted by BYU in Provo, Utah, Bruce met Dave Krehbiel, then-principal horn of the San Francisco Symphony. Dave encouraged Bruce to audition for a horn vacancy in San Francisco. After winning that audition, the family moved north of San Francisco where they had their second child, Mason, in 1989.

During his time in the San Francisco Symphony, Bruce has played every position in the section, but has spent the bulk of his time playing Third Horn and Associate Principal. Over the years he has done extensive recording work at Skywalker Studios and he is a founding member of the Bay Brass.

His interest in horn design and building has been a long simmering passion that wasn’t explored until his children were grown and he finally had the time to pursue it. He has worked with Keith Berg and George McCracken to gain shop skills and share ideas on all things horn.

Bruce collaborates with German valve and bell makers to produce the parts that are needed for his new designs. He has developed two new horns that can be viewed at:  hornforensics.blogspot.com

Horn Forensics is the result of Bruce’s desire to give back to others what he has learned over many years of playing horn and experimenting with design ideas. It is priceless to see players' faces light up when they realize their upgraded equipment is going to make their musical life so much easier.

May it continue for a good long while!